Our society can be described as post Christian. While we maintain the external shell of Christianity, the inner meaning has shrivelled. A common example is Christmas. It is a commercial holiday, even a celebration of "life" and "goodwill," but the startling notion that the Creator of the universe took human flesh is no longer the focus. We saw another example of post Christianity this week. Celebrations of marti gras (or Fat Tuesday as it is called here in Seattle) have expanded--excuse the pun--but their connection to today, Ash Wednesday, have become vague.

The exuberance of carnival originated as a counterweight to the austerity of Lent. It pointed to something beyond this valley of tears, namely Easter, the resurrection itself. It is important not to lose sight of that as we receive the cross of ashes on our foreheads to inaugurate these forty days of preparation.

As a help to understanding the true character of Lent, I would like to read two sentences from St. Augustine. In his Tract on the First Letter of John he stated:

"The entire life of a good Christian is in fact an exercise
of holy desire. You do not see what you long for, but the
very act of desiring prepares you, so that when he comes you
may see and be utterly satisfied."

Lent can be understood as an exercise of holy desire. Augustine points out what has become a willful blindness. We tend to fill our days with three things: work, solving problems and diversions. For most of us we work and try to solve problems (like health or car breakdowns) in order to have more time to spend on our diversions: reading, vacations, friends, meals, sports, games, TV, etc. None of those things are bad in themselves, but they keep us from seeing what we really long for.

Lent is a time to put aside some of the diversions and, as they say, get in touch with our true desire. Jesus sets out the program in the Gospel we just heard. Before going into detail, let me clear up an unfortunate misunderstanding. Some people have concluded, especially since the sixties, that because Jesus criticized the way the Pharisee's fasted, he was down-playing fasting itself. Nothing could be further from the truth. Jesus assumed that his disciples would fast and up until very recent times, all Christians have understood - and acted upon - that assumption.

Fasting says "no" to the most obvious diversion in our lives. It is a paradigm for all other Christian discipline, denying ourselves some immediate gratification for the sake of a greater future good. It is interesting that while in general we have given up the practice of fasting almost everyone is on a diet. Even people like myself who are the object of some resentment because we "eat anything" and don't gain weight, even we "watch certain foods." On this point I tend to say, "OK, don't call it fasting. Call it a diet. But try to see a deeper spiritual reason."

In this regard the discipline of Lent can be a tremendous help. Today and Good Friday are official days of fast and the other six Fridays are days of abstinence from meat. Even though this is a quite minimal requirement, I have had people ask me for a dispensation because they are attending some social affair. My response has been, "That is exactly the point of the abstinence law, to give a witness to others and your own self." It is not such a hard requirement, although I do have to admit that Fridays of Lent are when I wake up thinking about a Big Mac.

What fasting does is help expose some of the false desire. Hopefully that will help us turn to the other two penitential practices of Lent: prayer and almsgiving. I want to invite you this Lent to spend one hour a week in prayer before the Blessed Sacrament. Here at Holy Family our Adoration Chapel is open twenty four hours a day. We have our Rice Bowls for almsgiving. This is not only to help the poor, but to remind ourselves than money can never buy us what will satisfy that holy desire St. Augustine described.

Let me conclude with his description of the cleansing necessary for the exercise of holy desire:

"This exercise will be effective only to the extent we free
ourselves from desires leading to infatuation with this
world. Let me return to the example I have already used, of
filling an empty container. God means to fill each of you
with what is good; so cast out what is bad! If he wishes to
fill you with honey and you are full of sour wine, where is
the honey to go? The vessel must be emptied of its contents
and then be cleansed."

Welcome to Lent, brother and sisters. May it be a time of emptying and cleansing--to discover our heart's true desire.

Go to Your Inner Room

The Purpose of Lent

When You Give Alms

Back to the Basics

SMV Bulletin (be patient - sometimes we have problems uploading) 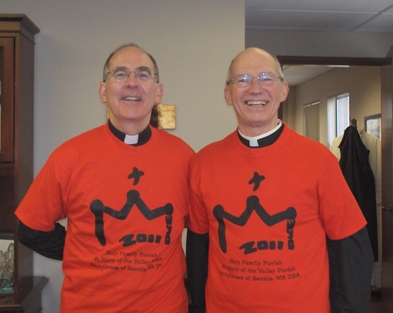 The recent revelations about Planned Parenthood’s willingness to cover up sexual exploitation build on revelations uncovered many years ago. Life Dynamics called hundreds of Planned Parenthood facilities nationwide. The caller, posing as a minor made pregnant by statutory rape, was consistently taught how to lie so that the abortion clinic would not have to report the incident.

As I always say, you can’t practice vice virtuously. Planned Parenthood carries out, justifies, defends, and even celebrates the horrifying dismemberment of children in the womb. After doing that, they are hardly going to have much of a conscience left in regard to any other kind of right and wrong. If one devalues the child in the womb, one will devalue the child outside the womb.