A Million Dollars for Your TV

Jesus took Peter, James and John and led them up a high mountain apart by themselves.(Mk 9:1)

A wealthy man once made the following proposition: Would you, for a million dollars, give up your television? Those asked immediately said, "yes," but then he explained it meant never watching TV again. Well, that sounded more serious. So they thought about it. In the end not one said they would promise never to watch television - even in exchange for a million dollars.

The question naturally arises, why have we become so attached to that box? In spite of all the hype about "reality television," few really believe it represents reality. On the contrary, we desire distraction. We dread the thought of life without a diversion like television.

Now, I cannot offer you a million dollars - or even a million pennies - to give up your TV. But I would like to offer you something more valuable if you will give it up, at least for the next five weeks of Lent. If you do, you will have an opportunity, like Peter, James and John, to spend some time apart with with Jesus. It could make all the difference in your life.

I am not saying it will be easy to take that time. Most of us protest that we are too "busy," but does life necessarily have to be filled with so many activities? Pascal put his finger on our problem in one of his Pensees:

Weariness.--Nothing is so insufferable to man as to be
completely at rest, without passions, without business,
without diversion, without study. He then feels his nothingness,
his forlornness, his insufficiency, his dependence, his weakness,
his emptiness. There will immediately arise from the depth of
his heart weariness, gloom, sadness, fretfulness, vexation, despair.

A time apart can bring the terrible feelings Pascal describes. I remember when I made a thirty day silent retreat. I was looking forward to it for months because my life in the parish has become so complicated and stressful. But when I got to the retreat house in Spokane, Fr. Nigro told us, "I know many of you have brought letters to answer, but please put them away. They will wait until the retreat is over." Well, I knew it would not be a time for reading novels and magazines or watching TV, but I thought letters would be legitimate. Then he told us to leave our spiritual books in the suitcases. "Oh, no," I thought, but I told myself I would dedicate the month to an intense Bible study. The final blow was when he told us we would only need to read very short paragraphs from the Bible which our director would assign as springboard for prayer.

Well, I did the best I could with days of silence, but I have to admit it was the longest month of my life! In the early days I found myself observing planes rise out of the Spokane airport and counting how many days till I would be on one. I did finally settle down - sort of - but I came away with a much deeper respect for the contemplative vocation, such as Carmelite nuns or Trappist priests. And I did meet the Lord in a way I never had before.

Now, I hardly had an experience like the one described today in the Gospel. That was a pure grace for Peter, James and John to get such a glimpse of Jesus' glory. But even for them time apart was an important condition for it to happen.

Turn off the TV (maybe even the computer, but wait till you've finished this homily) and spend some time apart with Jesus. We also need to turn off another source of diversion - the hunt for tantalizing food. I am not saying we spend the next weeks in a fast, but some sacrifice is called for. I think of my mom in that regard. A couple of years ago during the first week of Lent, I had stopped at the bakery to pick up some of her favorite pastries - the special kind with cream filling. My mouth waters right now when I think about them. But when I showed them to Ma, she said, "Thanks, but I have given up pastries for Lent."

I said, "That's OK. Louie and I will eat them. I also brought some Seattle's Finest Chocolates."

She looked at me and said, "I have given up chocolates too." Now, if my mom, who was eighty at the time, could sacrifice some of her favorite foods for Lent, what about us?

To give up TV or some favorite food could be a challenging Lenten sacrifice. But on this Transfiguration Sunday, I want to ask you to consider giving up something even greater - the future. No, I am not asking you to take your life, but rather to concentrate on the present moment. To meet Jesus now. Again Pascal sums up our problem:

Let each one examine his thoughts, and he will find them all
occupied with the past and the future. We scarcely ever
think of the present; and if we think of it, it is only to take
light from it to arrange the future. The present is never our end.
The past and the present are our means; the future alone is our end.
So we never live, but we hope to live; and, as we are always
preparing to be happy, it is inevitable we should never be so.

We can only meet Jesus in the present moment. When I was a boy, I thought my life would really begin when I got out of high school, then it became when I was ordained, then when I was pastor of a certain parish. Now I am pastor of a parish which has exceeded all I hoped for - a huge Hispanic community, other immigrant groups plus several Anglo families open to having a lot of children and serious about living their Catholic faith. I could not ask for more - yet I sometimes find myself daydreaming about retiring at 65 and heading back to the mountains of Peru! I know well the dilemma Pascal describes of preparing to be happy rather than being happy. Of course I do know that only one person can make me happy - and I am not talking about someone I wish would call! I am speaking about the one who showed his brilliance to those favored apostles. When Jesus allows us that glimpse, the awestruck words of Peter will also flow from our interior, "It is good that we are here."

From Archives (Year B homilies for 2nd Sunday of Lent):

2012: The Convenant with Noah Today

2005: A Confrontation with Evil

2002: The Boston Scandal: A Lenten Reflection

2001: Voice from the Earthquake 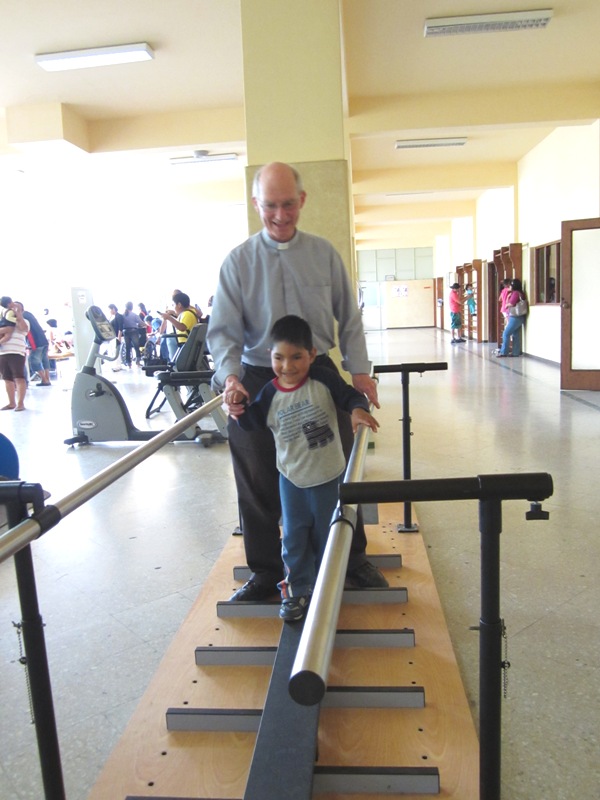 (A child in Peru who needs your help)