"Each in His Native Language"

Our church today has taken on the color red. You see it in the decorations and vestments, also many of you responded to Deacon Ted's invitation to wear a red sweater, tie or dress. We are doing all this to honor the Third Person of the Blessed Trinity. Red signifies the Holy Spirit whose coming we celebrate on Pentecost Sunday.

I'd like to call your attention to a couple aspects of his coming. First, we hear that when the apostles received the Holy Spirit, each one heard them in his native language. That phrase has a meaning for us here at Holy Family since we have parishioners with so many different native languages. For sure each one is striving to learn English, but there is a deep desire to hear and express the faith in ones native tongue.

Let me give a personal example. When I was a theology student in Italy, after three years I had learned Italian fairly well. Once when I was traveling I had a desire to go to confession. I entered the confessional and began speaking to the priest. He of course recognized my accent and asked where I was from. When I told him, he said I could confess in English if I wanted to. Even tho my Italian was perhaps as good as that priest's English, it was still such a relief to be able to do the confession in my mother tongue.

That is the case with many immigrants here. Even tho they know English well enough to conduct everyday business and to hold a job, still when it comes to expressing something really intimate, only the mother tongue satisfies. And nothing is more intimate to any of us than our faith, our relationship with God.

The other churches know this well. In the Seattle-Tacoma area there is an association of Hispanic Evangelical Churches. Can you guess how many belong to that association? Thirty-five. That does not include Mormons, Jehovah Witnesses, Adventists and others who are also reaching out to Hispanics in their own language. Almost all of them are having remarkable success.

But I will be honest with you. There is something that troubles me even more than Hispanics leaving their Catholic faith to join Protestant churches. I worry most about those who come here and get so caught up in our consumer society, that they become secularized and lose all religious practice.

Holy Family Parish has a mission to reach out to Hispanics in their own language. This began back in the 70's. This mission has grown and has been re-affirmed by both Archbishop Murphy and Archbishop Brunett. Since his arrival Archbishop Brunett has celebrated a Spanish Mass and a bilingual Mass here in our parish and he will return in October for Our Lord of the Miracles, a Peruvian devotion.

Besides the backing from our bishops, I have to say I have been impressed by the overall support of Holy Family parishioners for this Hispanic outreach. From 1981 to 1987 I celebrated a Spanish Mass each week here, first in the Ailbe House chapel, later in this church. I always heard encouraging words from non-Hispanic parishioners and staff. Some people say there is racism at Holy Family. That has just not been my experience. Sure, given the society we live in, there have sometimes been comments that I would characterize as rude or hurtful, but usually not racist as such. Once someone said to me, "I think that guy is a racist." I said, "no, he's rude to everybody, white, black, Asian, Hispanic. Equal opportunity offender." But guys like that are truly rare. What I have heard has more been genuine concern for the parish and how we can all work together.

As your pastor I try to listen and then make the best decision I can. Five months ago, in light of the overflow crowds at our 12:30 Mass, we announced the decision to add an extra Sunday Spanish Mass. That will begin in three weeks. I know it requires a certain adjustment and sacrifice. At the same time a number of folks have told me they are looking forward to the first English Mass starting a half hour earlier. Instead of 8:30 it will begin at 8 a.m. Likewise the second English Mass will change from 10:30 to 11 a.m. I assume there are people looking forward to an extra half hour of sleep, but no one has admitted that to me yet.

Having the 9:30 Spanish Mass will be good outreach to Hispanic immigrants in our area. We obviously want them to be a part of our parish. Most of all we want to fulfill God's word to us today that each one would be able to hear and express the faith in this native language.

On this Pentecost Sunday we recognize that faith comes by hearing, but we also see an even deeper aspect. In the final analysis faith is made possible by the power of the Holy Spirit. St. Paul states it unequivocally: No one can say, "Jesus is Lord," except by the Holy Spirit. (I Cor 12:3) Nor can we acknowledge God as "Abba, Father," unless moved by the Holy Spirit. (Rom 8:15)

We pray for that gift of faith this Sunday. We cannot come to God without. The gap between us as creatures and God as our creator is enormous. It is greater than the distance between any of us and the lowliest insect. I've heard of people who have insects for pets, for example a tarantula spider. They give them cute names like Blackie or Fuzzy, feed them special treats and in general lavish affection on them. We can only guess what the attention means to the spider, if anything. However, to have a real relationship with a human being, he would have to be transformed in a miraculous way. The same is true for us in our relation with God. We need the Holy Spirit.

Our need for the Holy Spirit is not just because of the natural distance between creature and Creator. There is an even greater problem. The inescapable fact is that we have turned our faces away from God. We have a kind of shame inside ourselves that makes us reluctant to approach God. For that reason when Jesus appeared to his disciples, he said, "Peace be with you." Then he added, "Receive the Holy Spirit. Whose sins you forgive are forgiven them." Sin can only be forgiven by the power of the Holy Spirit. As Catholics we have the great advantage of receiving the Holy Spirit in the sacrament of confession. To take once again the analogy of the tarantula spider: if it were relate to a human, it would not only need to be elevated. It would also have to lose its venom. Same for us, we can only relate to God by forgivness and healing of our sins.

The words of the Sequence become our prayer this Sunday:

Come, Holy Spirit, come!
Come, Father of the poor!
Heal our wounds, our strength renew;
On our dryness pour your dew;
Wash the stains of guilt away.
Bend the stubborn heart and will;
Melt the frozen, warm the chill;
Guide the steps that go astray.
On the faithful, who adore
And confess you, evermore
In your sevenfold gift descend;
Give them virtue's sure reward;
Given them your salvation, Lord;
Give them joys that never end.
Amen. Alleluia. 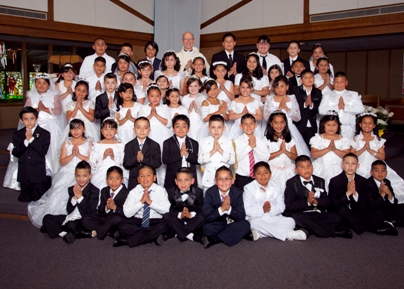 Footnote to comments on World Civilization Course: There is a lot one could say about this high school textbook. It purports to be comprehensive, but it leaves a lot out. For example, its ample index does not have an entry for Mother Theresa or Pope John Paul II. Even from a secular point of view they are two people who had a deep and ongoing impact on our world. By way of contrast, the textbook did have a section on Betty Friedan! Subsequently I came across this quote from University of Wisconsin Professor Stanley Payne about the current state of history studies:

Major themes are replaced by comparatively minor considerations, which emphasize small groups, deviants and cultural oddities. Most studies are required to fit somewhere within the new sacred trinity of race, class and gender - the new "cultural Marxism." Research that does not conform to these criteria is increasingly eliminated from the universities, where hiring practices in the humanities and social science have become blatantly discriminatory. (from "Controversies over History in Contemporary Spain")