"probably the largest chondrite meteorite to have fallen" 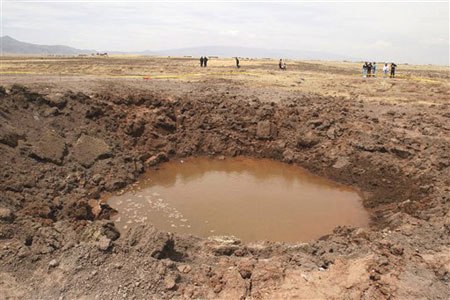 On October 8, I had the opportunity to visit the site of the meteorite which fell in the community of Carancas in Southern Peru, near the town of Desaguadero.

Melani Palacios and her cousin Lucero:

Some young men offered to sell us pieces of the meteorite for twenty dollars. I gave them three dollars for a picture:

The fragments of the meteorite contain iron and thus are detected by the use of magnet:

After touring the site of the meteorite, I visited Padre Miguel Maquera, pastor of Desaugadero. He told me that when the meteorite struck on September 15, around noon, it was like loud thunder that repeated three times.