Bottom line: In the Magi we see a profound act of surrender. That surrender doesn't create heaven on earth. Nor does it take away the questions about existence, life, the cosmos. Just the opposite, those questions lead to Jesus.

Human beings in different cultures and different centuries have asked these questions: Why is there something and not nothing at all? What is this web of life we belong to? And the stars and planets: How do the heavens relate to our lives here below?

The magi - the Kings or Wise Men - asked those kinds of questions. In the bulletin I wrote something about the magi and their significance - especially for people who have bought the idea that science and faith are opposed to each other. As today's Gospel shows, the magi study the night sky and see a star. It leads them to a very peculiar people - a people who believe God is not some kind of impersonal force but rather a true person - a person who has entered into a covenant with them. The star guides the magi to Jerusalem where they meet the Jewish priests and scribes who explain their writings - the Scriptures - to them.

These Jewish leaders then direct the magi to a small town, about six miles from Jerusalem. From this town would come a ruler to shepherd God's people. In Bethlehem they see the Newborn King of the Jews. Before him they prostrate themselves, that is, they lie flat on the ground, opening their treasures to him.

What an amazing journey! The Magi go from careful observation of the skies to an encounter with the Jewish people, then with a Jewish child - him they worship and turn over their treasures.

Many people make a similar journey. They may spend years searching and stumbling, then finally meet Jesus and believe in him. He takes over and guides them.

We can see that journey in C.S. Lewis who wrote Screwtape Letters and Chronicles of Narnia. Lewis tells how as a youth he fled God, denying his existence and at the same time angry with God for not doing something about the sufferings and cruelty of the world. He eventually becomes literature professor at Oxford. There he meets J.R.R. Tolkien (author of Lord of the Rings). Unique among university professors, Tolkien is a Roman Catholic who attends daily Mass. Lewis asks Tolkien why bother with Christianity which seems like one more myth. Tolkien explains that, yes, part of the Christian story has a structure similar to certain myths, but it's different. It is a "true myth: a myth working on us in the same way as the others, but with this tremendous difference that it really happened."

This idea sends a shock through Lewis - and even though he continues resisting, he keeps receiving other confirmations of Christianity's truth. Lewis compares it to a chess game with God as his opponent. In spite of Lewis' defenses, God breaks through: first "check" and then "checkmate." He kneels in his room and quietly prays. Like the Magi he worships Jesus and opens his treasures - his life, his amazing intellect.

For me it was not so dramatic - or so consequential - as the conversion of C.S. Lewis. At the beginning of my senior year, I was working at summer job, tending the garden of an elderly lady. Trimming a flower bed, it came over me that I could become a priest - and that I should become a priest. I waited 40 days to tell anyone, but from that moment I knew priesthood is God's plan for me. I've had good days and bad days, crazy and lazy days, but I have never doubted this is God's purpose for me.

This ties with a Christmas gift from Archbishop Sartain. I mentioned it on New Year's: Into Your Hands, Father by Wilfrid Stinissen. He identifies our spiritual malaise: "We are pulled in different directions and instead of finding peace, we become restless." I worry about that as your pastor. The last thing I want is to impose one more burden on you.

So what's the solution? Fr. Stinissen says, "What we need most is a central idea, something so basic and comprehensive that it encompasses everything else." The central idea, he says, is "surrender". The point of all we do - things like Generations of Faith, Stewardship, fasting and prayer or things we do in our homes like the Consecration to the Holy Family and the blessed chalk we use to mark our homes at Epiphany - it's all about that central act - surrender to God. Even things that we don't categorize as "spiritual" like a Knights of Columbus breakfast or Steak Dinner, they are meant to promote community and mutual encouragement. Sometimes they involved getting out of one's comfort zone. Take what works for you, but don't expect Christian life to be all whistles and bells. As Fr.Stinnisen says, "What ties our spiritual life together is the act of surrender."

Next Sunday we will see an act of surrender as John the Baptist says "I am not worthy..." That's for next week

Today the message is this: in the Magi we see a profound act of surrender. That surrender doesn't create heaven on earth. Nor does it take away the questions about existence, life, the cosmos. Just the opposite, those questions lead to Jesus. I invite you like the Magi to make an act of surrender, to set your treasures before him. Amen.


2016: Facing the Perceived Conflict of Science and Religion

2003: The Materialist and the Magicians

2002: Astrology and the Christ Child

2001: Together with His Mother 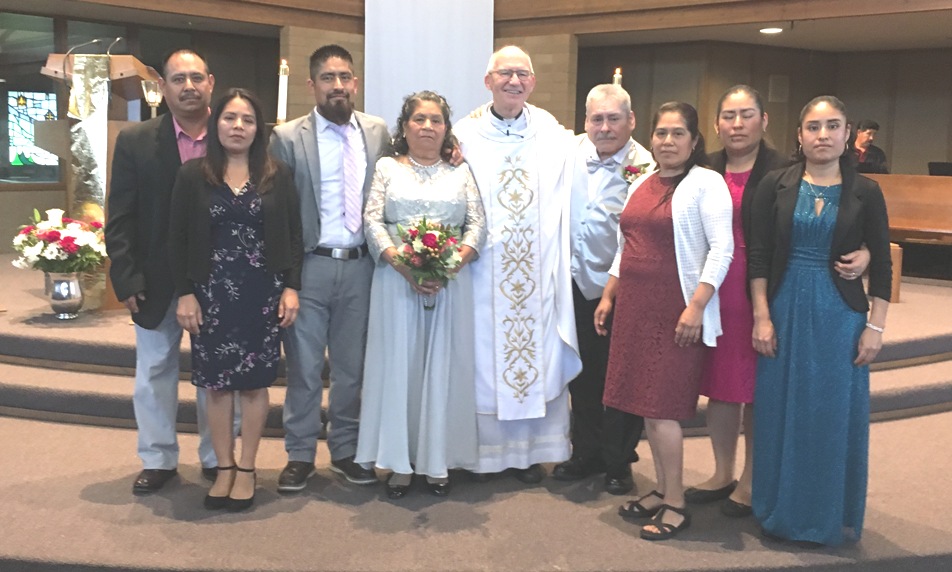