This Sunday we hear the great parable about compassion. By giving the example of the Good Samaritan, Jesus seems to be telling us that compassion is the one thing necessary for salvation. That is the conclusion we gain from the sequence of questions and answers in the Gospel:

1. What must I do to have eternal life? Answer: Keep the commandments which are summed up in love of God and neighbor.

2. Who is my neighbor? Answer: The parable of the Good Samaritan who took pity on the unfortunate man.

3. Which of the three was neighbor to the man beaten by robbers? Answer: "The one who treated him with compassion."

Then Jesus says, "Go and do the same." He seems to be telling us is if you want to go to heaven what you have to do is learn to be a compassionate person. The uptight priest and the legalistic Levite will be excluded. But the Samaritan, who belonged to a despised race, will gain the great prize. Why? Because he was compassionate.

If compassion is so central to our salvation, we would do well to examine what it really is. On one level it seems so obvious: Compassion is identifying with the suffering of the other person. If we break down the word, "com" means "with" and "passion" means "suffering." To be compassionate then is to suffer with the one who is hurting. In the parable the priest and Levite saw the man beaten by robbers, but simply continued on. The Samaritan however stopped and "was moved with pity." He had compassion, but not just an emotion, but a feeling which led to action. He took care of the unfortunate man. That is a beautiful thing.

I have seen that kind of compassion come forth, for example, when I describe to others what people are suffering in Peru. I've told congregations about children who were abandoned by their fathers and whose mothers lacked resources to feed, clothe and educate them. People not only responded by feeling sorry for them, but much more important, they gave money to help those single moms. That was a very practical form of compassion.

From this example you can already see that compassion is more than just feeling. It is an emotion which proves itself by a concrete response to the other person's needs. But that is not the whole story. This Sunday's Gospel shows us that two other things are also involved in true compassion.

The first can be seen in the contrast between the priest-Levite pair and the Samaritan. According to Scripture scholars, the action of the first two must be understood in the context of their laws of ritual purity. If they touched a corpse, they would be disqualified from carrying out their duties. In the parable, Jesus says the robbers left the man half dead. They perhaps concluded he was dead or very close to it. The point is they did not investigate. They did not try to find out the truth. They simply continued on.

Finding out the truth is first step of compassion. As in the case of the Samaritan, it involves stopping and questioning, especially if our first conclusion seems a little too convenient. Compassion investigates, tries to discover the truth. Brothers and sisters, there is no real compassion without truth.

Let me illustrate this by a current controversy in our country. There is a debate in the U.S. Congress on whether our taxes should go to provide hormonal forms of birth control as part of the coverage for the 1.2 million women who are federal employees or covered by the health plans of of federal workers. The opponents point out that birth control pills, Depo-Provera and Norplant sometimes work not by preventing ovulation, but rather the implantation of a fertilized egg. In other words they cannot be considered just contraceptives (= against conception), because they sometimes do their job after conception. Among those who favor spending our taxes for that purpose is is the editor of our local newspaper, the Seattle P-I. He chastised "those anti-abortion activists who believe that life begins at the instant of fertilization (not later when the egg attaches to the womb)." In the same paper one of the columnists (Mariane Means) also attacked those who "oppose birth control devices that can prevent a fertilized egg from implanting in the womb." She went on to state that "most Protestant and Jewish theologians...believe that an embryo is not a human until life has quickened and can survive outside the mother's body."

Both the editor and the columnists consider that the opponents of funding these methods lack compassion for the woman who might face an unwanted pregnancy. But can compassion be separated from truth? It may be comforting to tell a woman that life is not human until it "quickens," that is, until she can feel movement. However an ultrasound would reveal that there is a lot of movement, including a beating heart and brain waves, long before the mother can detect any kicking ("quickening"). Likewise it might comfort a woman taking the morning after pill (or Depo-Provera or Norplant or the birth control pill) to be told that she is not pregnant until implantation. But it leaves unanswered the question, "What is this tiny creature that has been conceived and is growing so rapidly as it makes its way to her womb and there floats free like a miniature astronaut?"

Now, it may be convenient to view the human genome or zygote as just some tissue with no meaning in itself. But please note that it was also convenient for the priest and Levite to conclude something similar about the man beaten by robbers. Perhaps like a woman facing an unwanted pregnancy, they were keenly aware of their responsibilities to other people--and to themselves. To pick up the man would have been to risk so much. But it comes down to a matter of truth: Is this a human life and therefore possessing an incalculable worth? Even tho he has appeared on my path at such an inopportune moment, can I turn my back on him? There might be a thousand good reasons for doing it, but if he is a living human being, those reasons have to take a back seat. The truth comes first, then the emotion which makes us take action.

Counterfeit compassion brushes aside the truth. Real compassion asks questions, investigates, tries to find out what is actually going on. But there is something else about true compassion. It operates within a context. Jesus sets the context before he tells the parable. When the lawyer asks Jesus what he must do to gain everlasting life, Jesus replies with the law, the Ten Commandments which are summed up the two great ones: love of God and love of neighbor. True compassion is exercised in that context. Without a grounding in the commandments, compassion often has disastrous effects.

Let me give a few examples. I have known girls who have given up a great treasure, their virginity, because they felt sorry for some guy. Afterwards he bragged to his friends and laughed at her gullibility. I have known parents who felt sorry for their child because he was tired or upset and told him he did not have to go to Mass this Sunday. Pretty soon he lost the important pattern of weekly worship. The results of forgetting the commandments to practice compassion are inevitably destructive.

One could multiply examples of compassion trumping morality. In fact our society is constantly doing just that. We are told to have compassion for the homosexual, which is good as long as it does not overrule the sixth and ninth commandments. Compassion for women in difficult pregnancies should not lead us to sweep aside the fifth. The falseness of such compassion would become clearer if I gave examples that almost everyone considers wrong: rape, wife abuse, pedophilia, drunken driving, etc. Any compassion we could muster for a rapist or pedophile would never lead us to justify his behavior.

Jesus warns us against a false and destructive compassion by situating his story of the Good Samaritan in the context of the ten commandments. It might be said that the commandments give us the framework for practicing true compassion. Compassion is something like a glowing fire. If it is held within the frame of a fireplace, it gives warmth and light to the home. But pull it out of that frame and pretty soon the whole house is burned down.

This month we celebrate the anniversary of an act that combined compassion with truth. Thirty years ago on July 25 Pope Paul VI published his famous encyclical Humanae Vitae. He told us the truth about the meaning and purpose of human sexuality--that it can be used only in marriage and there must always remain open to the procreation of life. Some people condemned it for lacking compassion to married couples. Thirty years later we can see he had the truest compassion. Non-Catholic sociologists are beginning to realize the disastrous consequences of such widespread contraception: premarital cohabitation with all the suffering it has caused, loss of communication and respect between spouses, marital infidelity and breakdown, disorientation of children, degradation of women, etc. These consequences of birth control were predicted by Pope Paul VI. One other thing he predicted was what I mentioned earlier in the current attempt to force all of us to pay for abortifacient forms of "birth control." He predicted that widespread acceptance of artificial birth control would lead to a blurring of the line between contraception and abortion. That of course has happened and is gradually leading to an acceptance of infanticide as the current debate over "partial birth abortion" makes clear.

As you can surmise, I am concerned about a misuse of the parable to the Good Samaritan. Another approach which would also avoid the common pitfall (compassion trumps morality) is the patristic one. For the Church Fathers the man beaten by robbers is humanity. The Good Samaritan is Jesus who takes compassion on us, heals our wounds with oil and wine (the sacraments), places us on his own mount (the cross) and takes us to an inn (the Church). The two coins are the twin commandments of love of God and neighbor, a debt we could never pay on our own, but which Jesus has paid for us. The command to "Go and do the same" is to recognize the compassion Jesus has shown to each of us and ask his help to extend that compassion to other. In this approach we avoid the fatal error of concluding we have some kind of personal righteousness (our supposed compassion) which saves us apart from Jesus' mercy.

2007: The Good Pagan and The Good Samaritan

2001: He Approached the Victim 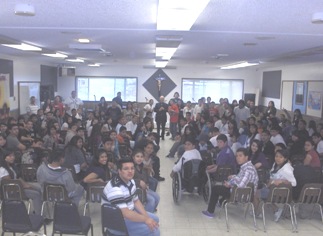 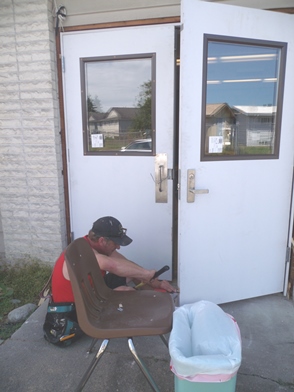